September’s issue of the Glenigan Construction Review - which reports on construction activity over the previous three months, and looks at planning approvals over the same period - identifies positive trends in activity as the industry has emerged from lockdown, restarted projects, and progressed new projects to site. 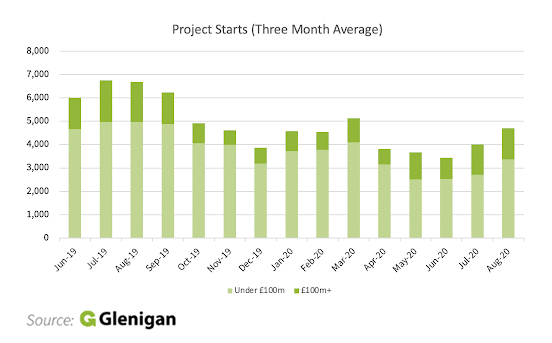 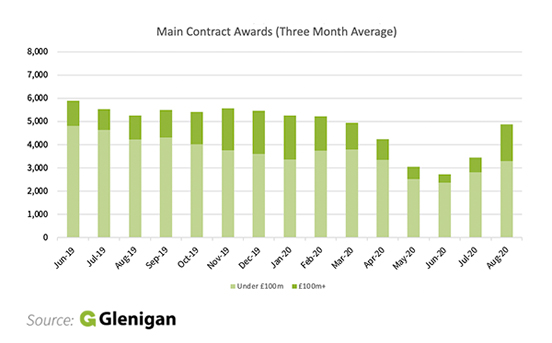 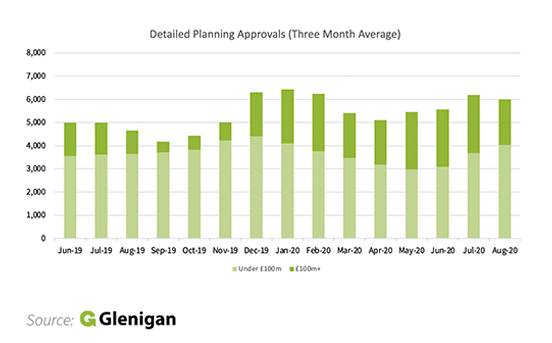 Major projects therefore are leading the recovery, due in part to the Government’s commitment to larger civil engineering schemes, mainly road projects, and possibly due to larger firms being more able to get back up to speed following the shutdown of sites.

The increased activity in major projects is reflected in our top contractor league tables, which have seen steady growth in the value of project awards since lockdown. 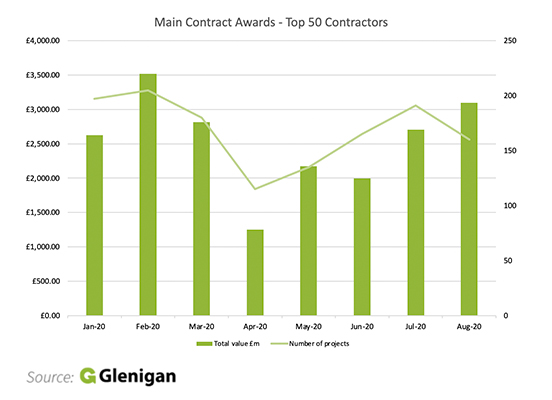 Last month, Balfour Beatty topped the Glenigan league table having been awarded 6 deals worth £556m, including two major road projects. They were followed by A & E Elkins in second place with their £300m contract to deliver 750 modular homes for the London Borough of Greenwich.

Following the Prime Minister’s ‘Build, Build, Build’ speech in June, the civil engineering pipeline is an area of significant growth. 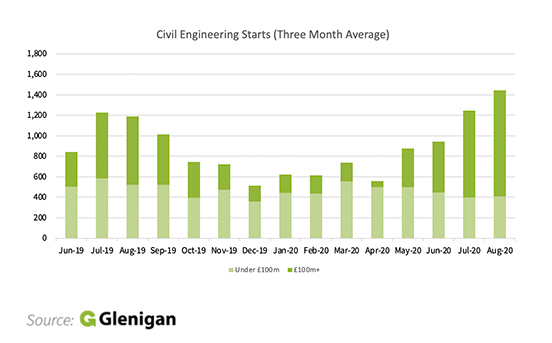 With growth of 22%, totalling £4.3 billion, civil engineering was the only sector to achieve growth over the previous year in terms of work commencing on-site. 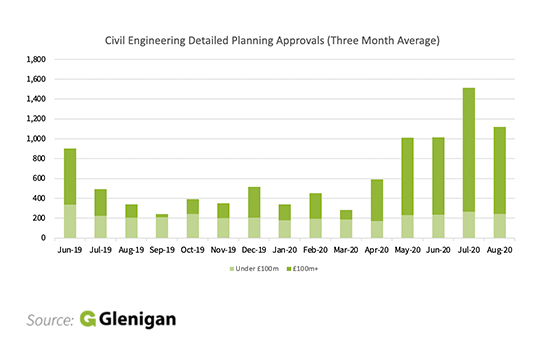 Detailed planning approvals were 228% higher than the previous year, adding up to £3.4 billion during the three months to August, largely due to a 540% increase in the value of major projects. The approval of the £1.8 billion Norfolk Vanguard Offshore Wind Farm and the £257 million Graythorp Energy Centre contributed significantly. 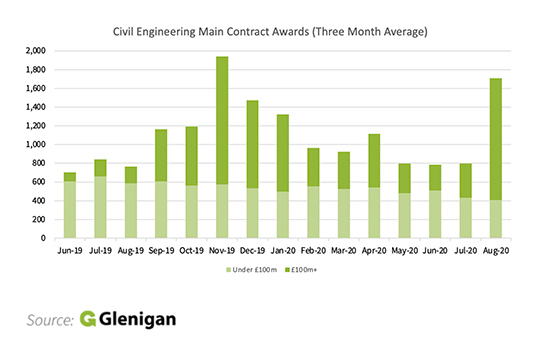 Main contract awards within the sector also provide a positive story, with the three months to August 123% higher than the same period in 2019, largely due to an increase of 623% in major awards. The awarding of two offshore windfarms in Scotland, one worth £1.4 billion and the other £1.16 billion, as well as several major road projects, both provided a major boost to the development pipeline. 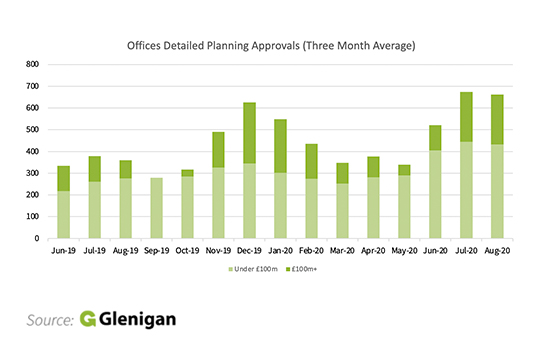 The development pipeline for the office sector experienced convincing growth during the three months to August, with the value of approvals rising 83% against 2019 to total almost £2 billion.

Major project approvals, totalling £690 million, were 173% higher than a year ago, and underlying approvals totalled £1.3 billion; a rise of 56% on the previous year and 53% on the preceding three months on a seasonally adjusted basis. Office sector growth was driven largely in the East of England, London and Scotland, all with tremendous increases on the previous year. 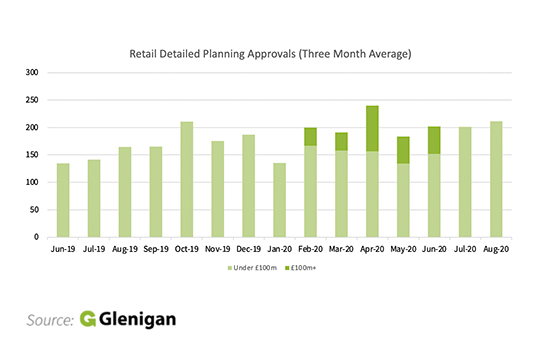 British retail sales continued to increase for the fourth consecutive month according to the ONS, and the sector appears to be confident of a continuation of demand seen with a rise in contract awards and detailed planning approvals over the previous year. 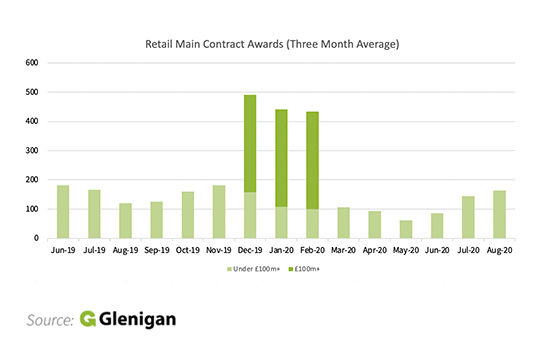 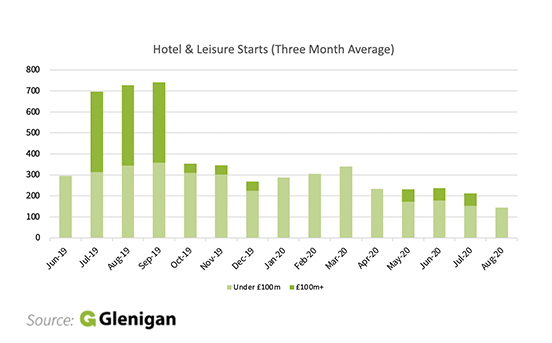 With Brexit, travel restrictions and uncertainties surrounding future lockdowns, it’s unsurprising that hotel & leisure sector projects commencing on-site were well behind 2019 levels. At £435 million, hotel & leisure starts were 80% down on the previous year. No major projects commenced on-site and underlying starts were 58% lower than a year ago and 24% lower than the preceding three months, seasonally adjusted.

To summarise, things are looking brighter for the development pipeline, with many sectors experiencing year-on-year growth and mostly recovering from the lockdown period.

However, with the weight of Brexit looming, and the potential threat of a second lockdown and more site closures, the immediate challenge for the industry is how it can quickly get work starting on-site back to pre-lockdown levels.

Glenigan customers can view all future opportunities behind this data via your subscription.

Not a Glenigan customer and want to see the detail behind the numbers to drive your business forward, please request a free demo where we'll show you opportunities that are just right for your business.