The health construction sector is showing signs of a revival with work starting on site and in the pipeline both improving.

Glenigan’s construction industry data shows that the value of underlying health construction work (less than £100 million) starting on-site leapt by 44% in the three months to July 2022. 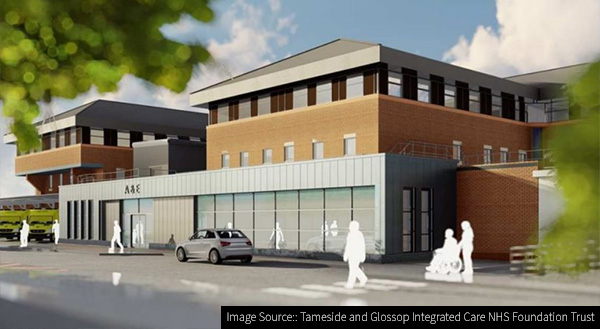 The North West has benefitted the most from the increase in spending with £150 million-worth of projects starting on site in the last three months, including a £20 million extension to Tameside General Hospital (Project ID: 21339599). More work is coming up in the region including a £30.6 million Emergency Care Campus in Stockport due to start in December (Project ID: 19271498).

The Department of Health is now the construction industry’s biggest client. In the 12 months to July 2022, the DoH awarded contracts for construction worth a total of £2,192 million and was ranked in first position in Glenigan’s rankings of the industry’s Top 100 clients.

This total is 7% up on the same stage a year ago, when the DoH was ranked second behind the Department of Transport.

Recent awards include Tilbury Douglas’ appointment to build a £77.3 million extension to Dorchester Community Hospital in Dorset where work is due to start in the New Year (Project ID: 20397024)

Proposals for a £58 million emergency department at Queen Alexandra Hospital in Portsmouth (Project ID: 21265027) is due to start work in September after IHP Integrated Health won the contract.

The increase in medical sector spending has propelled IHP Integrated Health, which is a joint venture between Sir Robert McAlpine and VINCI, into the Top 25 of the industry’s contractors.

Recent successes for IHP include a £90 million National Rehabilitation Centre in Loughborough, where work is due to start in December according to Glenigan’s industry intelligence (Project ID: 20415869).

More health work is coming through the pipeline. The value of health projects given detailed planning permission in the three months to July 2022 has leapt by 33% according to Glenigan’s construction industry research.

Glenigan economics director Allan Wilén comments: “Encouragingly, the value of underlying health detailed planning approvals has improved progressively over the last four years with growth of 3% in 2019, 36% in 2020 and 9% in 2021 and into 2022.

“Additional government funding promised in the Spending Review will boost sector activity towards the end of 2024.”

The largest amount of work approved by value is in London including a £300 million redevelopment of Whipp’s Cross Hospital in the east of the capital (Project ID: 20102249), and the South West, where a £42 million dementia nursing home in Bristol (Project ID: 17262688) and a £32 million Wellbeing Centre in Plymouth (Project ID: 21449924) both now have planning.

Value of Planning Approvals by Region

With work in the pipeline and starting on site improving, the prospects for this sector look strong.

Glenigan customers can see details of all new health construction work if part of your subscription.

Not a Glenigan customer, but would like to see detailed sales leads for all new health construction work? Request a free demo of Glenigan today so we can show the size of the opportunity for your business.