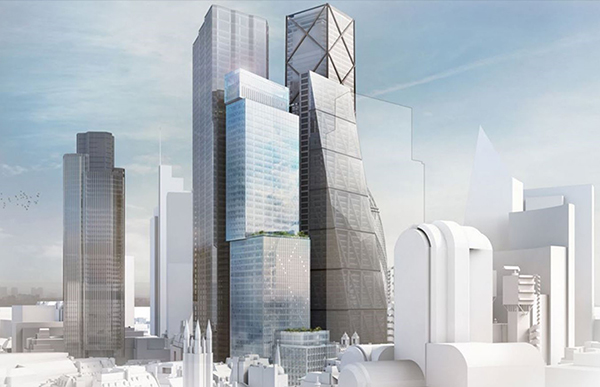 Political and financial market uncertainty does not seem to have dented developers’ confidence in the capital’s commercial property sector, particularly in the City of London. A series of new project starts and quoted company trading statements point to brighter times for City of London new office construction.

The latest Glenigan Construction Review shows that office construction starts in London were worth £1,471 million during the 3 months to July, more than double the level of a year ago and accounting for almost two thirds of the entire new commercial sector. Across the industry, London was the best-performing area of the UK in the second quarter with total construction project starts up 31% on the period a year ago.

The mood amongst major suppliers to the construction sector in the capital is also encouraging. Severfield, the UK’s largest steel fabricator which supplied the steel for the City’s tallest office tower at 22 Bishopsgate, said recently that it was starting to see more bidding activity in the London commercial market. Moreover, it expects this trend to increase over the next few years.

Severfield’s £295 million order book includes the steel for the new 11-storey Google hq at King’s Cross, north of the City, which is set for completion next year.

Meanwhile, some major office construction projects are taking shape across the City. Construction started in the spring on MEC London Property’s £300 million office development at 8 Bishopsgate. Lendlease is the main contractor on the project which involves over 84,000 sq m of new space and where work is set to run until late 2022 (Glenigan Project ID: 13347561).

Tenders have recently been returned on another huge City development; TH Real Estate’s £400 million office and retail scheme at 40 Leadenhall, where M&G are in talks to fund the scheme. Known as ‘Gotham City’, the scheme involves almost 82,600 sq m of office space and 2,000 sq m of retail space, with work potentially starting at the end of this year (Glenigan Project ID: 13309454).

Elsewhere in the City, demolition works have recently been completed and plans submitted for the £40 million Old Bailey Development involving an office extension and alterations. The scheme is at the pre-tender stage with work set to start next summer and continue for 12 months (Glenigan Project ID: 18064883).

The pipeline also includes a £75 million development at 130 Fenchurch Street where Aviva Investors is planning an office building over two basement levels and 18 upper storeys. The scheme is in the early stages with construction set to start in autumn 2020 (Glenigan Project ID: 14252496).