Construction work is recovering after the impact of lockdown with less disruption to site work, more project-starts, and more contract awards anticipated as the industry gets back to work.

Looking back at activity over the three months to the end of June, this is very welcome news. The sheer scale of the impact of lockdown is astonishing, with the value of projects starting on-site 45% down on a year ago!

Contract awards were up and down

The decline in construction activity plummeted by 30% against a year earlier according to the latest data published by the ONS.

The disruption to work on-site was greatest during April. Output during May rose by 8% against the preceding month as more sites re-opened, although output was still 40% down on a year earlier.

The CIPS Construction Index suggests that construction activity improved further during June. At 55.3 the June index points to a marked increase in total construction output against the preceding month. Any figure above 50 figures indicates a rise in output.

While there’s still a long way to go until the market gets back to a normal, our data shows that the most immediate, debilitating effects of the pandemic and lockdown are easing, and we’re now entering a phase of recovery.

The planning pipeline is showing positive signs, with applications on an upward trend since May. Decisions are recovering and following the trend of increasing applications. 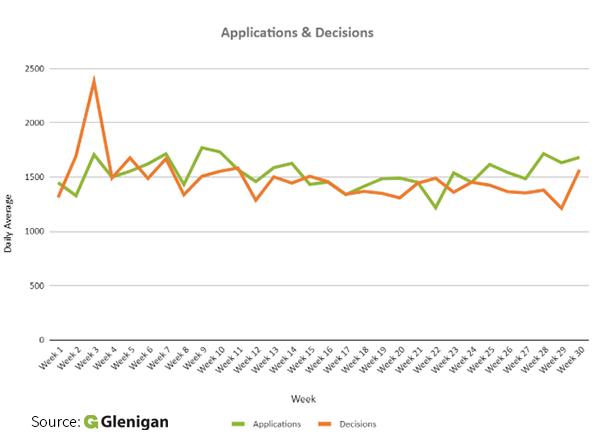 And the positive trend continues with a 49% month-on-month increase in the underlying value of main contracts awarded in June, which is just 4% down on 2019 figures. 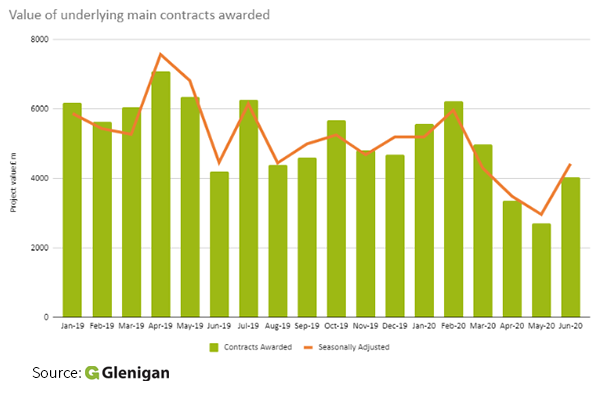 In terms of suspended projects reopening, this has slowed, as firms have focused on the most profitable and most appropriate sites to reopen first, leaving a small percentage of more challenging sites still to resume.

With the dramatic disruption thankfully behind us, the market is starting to shift gear and focus on rebuilding.

Glenigan customers can read a full breakdown of the impact of lockdown in the full Glenigan Construction Review from their insight pages.