Glenigan Index of construction starts to end of May 2022

The June Index paints a more optimistic picture following the gloomy outlook of the previous three months, which will no doubt come as welcome news for the sector.

After almost a year of steady decline, the value of underlying project-starts increased by almost a tenth during the three months to May. Furthermore, the past twelve months has seen a strong development pipeline of contract awards and planning approvals built-up, indicating green shoots of recovery are starting to emerge.

However, this modest uptick should be approached with cautious optimism. External influences, particularly the fallout from the Russia-Ukraine War and Brexit continue to send shockwaves through UK business and industry, with supply chains tightly squeezed throughout the first half of 2022.

Inevitably, this has led to building product and manpower shortages as well as soaring prices with construction material inflation rising around 25% Y-o-Y. This has resulted in significant delays to projects commencing on-site, as start dates are pushed back to accommodate higher material and labour costs.

It’s clear, whilst the outlook looks decidedly more positive than in recent months, there is still some way to go before the sector returns to the levels of growth seen in Spring/Summer 2021. 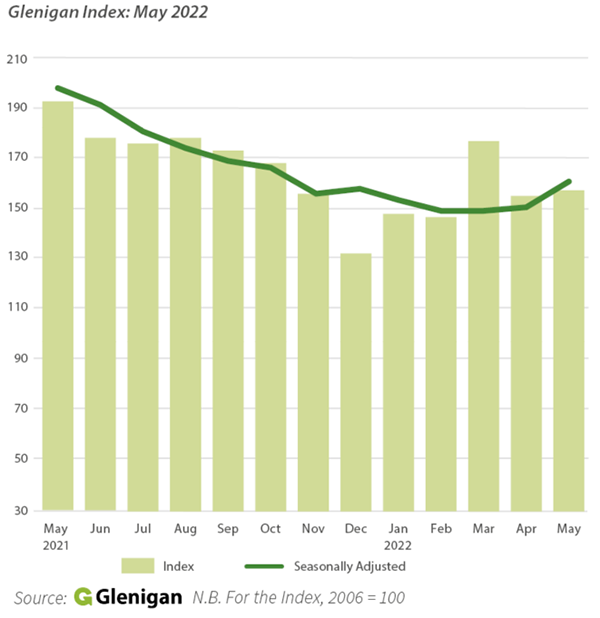 Overall, residential project-starts performed well during the three months to May, increasing 24% against the preceding three month period, but falling by a quarter compared to last year.

Private housing-starts accounted for the bulk of this growth, representing the greatest increase (+45%) of any sector during this period. Despite this, the value of private starts remained 23% lower than a year ago.

Social housing construction-starts continued to decline, falling 23% against the last quarter, representing a 32% decline on the same period in 2021.

Performance was also mixed in the non-residential sector.

Office project-starts remained the fastest growing vertical compared with the preceding three months, increasing by almost a third (27%) during the three months to May, but remaining 3% lower than a year ago.

Retail (+1%) and health (+8%) were the only other verticals to experience growth against the previous three-month period. Despite these small uplifts, retail stood 17% lower than the preceding year, while health remained unchanged.

Hotel and leisure starts experienced a steep decline following an initial burst of activity at the outset of 2022, falling a third (-30%) from the preceding three months. This meant it experienced the greatest decrease of any vertical in this period. However, a 4% value-increase against the previous year indicates that the vertical is showing some signs of recovery following pandemic-related stagnation.

Overall, education experienced the worst decline with the value of project-starts falling 12% against the previous three months, and down 17% compared with the same time last year.

Industrial project-starts continued to falter on the strong performance seen at the end of 2021 and the start of 2022, experiencing a decline of 7% during the three months to May to stand 5% lower than the same period last year.

Wales was the only part of the UK to experience growth against both periods, reporting a project-starts value increase of 21% against the preceding three months to stand 13% up on a year ago.

However, the outlook was also positive for other regions, particularly the South East, which experienced improvement against the preceding quarter. In fact, it was the strongest-performing region in the UK, with a value increase of 30% in the three months to May despite project-starts falling 2% against the previous year.

However, fortunes were reversed in the North East, which stalled on its strong performance in early 2022, experiencing a particularly steep decline in the value of project-starts (-18%) against the preceding three months to stand 29% lower than a year ago.

Three other regions experienced a poor three months leading up to the end of May, including London which saw a 13% decline against the past three months as well as an overall fall of 29% against the previous year.

Project-starts in Yorkshire & the Humber remained distinctly down on last year, suffering the greatest decline (-37%) of any region compared with the same time in 2021.

Commenting on the Index’s findings, Glenigan’s Senior Economist, Rhys Gadsby said “This month we have seen a slight uptick in project-starts, and this increase in work commencing on-site suggests much-desired signs of recovery after almost a year of decline. Sharp increases in labour and material costs have presented a challenging few months for the industry, but a near 10% increase in the value of project-starts is a welcome change of direction, offering a promising outlook for the second half of 2022.

“I am hopeful that the June Index signifies a turning point for the construction industry following a very challenging period.”