Glenigan Index of construction starts to end of June 2022

Commenting on the latest numbers Rhys Gadsby, Senior Economist at Glenigan said: "Project-starts returned to decline in June as construction material inflation, currently riding at 25% year-on-year, continues to disrupt industry activity. While strong growth in private housing-starts may provide the industry with some positivity, declines among the civil engineering and non-residential sectors are largely holding back any form of recovery." 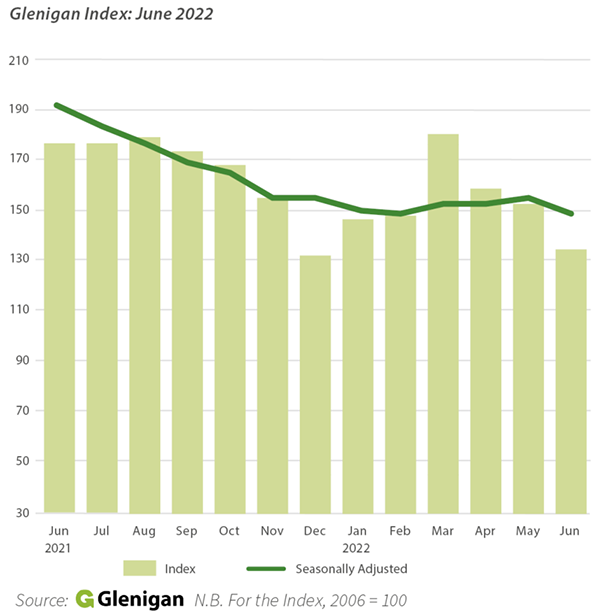 While health construction-starts remained unchanged on the preceding quarter, the value fell by a quarter compared with a year ago. Industrial project-starts also fell by a quarter against the previous year, but also experienced the greatest fall (-36%) against the preceding quarter of any non-residential sector. Hotel & Leisure (-32%), Offices (-23%) and Education (-21%) also experienced strong declines during Q2 to stand 40%, 30% and 37% lower than a year ago respectively.

Civil engineering experienced a very poor period for project-starts with the value having experienced the greatest declines against both the preceding quarter (-27%) and previous year (-47%). Utilities suffered the weakest period, with project-starts falling 30% during Q2 to stand almost half (-48%) the value of the previous year. This was the strongest decline of any sector against the previous year. Similarly, infrastructure-starts fell by a quarter against the preceding quarter and 46% compared with a year ago.

Performance among UK regions was very mixed in Q2. On a positive note, the most-northern regions of England performed well with growth of 7% in the North East and 2% in the North West against the preceding quarter.