The August Glenigan Index highlights a downward trend across most sector verticals, with the value of underlying work starting on-site falling 13% during the three months to July, to stand 20% lower than a year ago.

Similar to previous Glenigan Index, construction industry recovery continues to be held back by ongoing supply chain issues caused by multiple factors. This includes the Russia-Ukraine war and persistent global materials shortages, which are significantly inflating costs and squeezing margins.

Furthermore, the sharp rise in underlying construction costs has no doubt negatively affected investor confidence, while a weaker economic outlook and cost of living crisis has reduced private household spending.

Both residential and non-residential construction-starts were down, dropping 12% and 25%, respectively. This value decrease may be due, in part, to developers bringing forward project-starts to get ahead of new Building Regulations that came into effect in June. 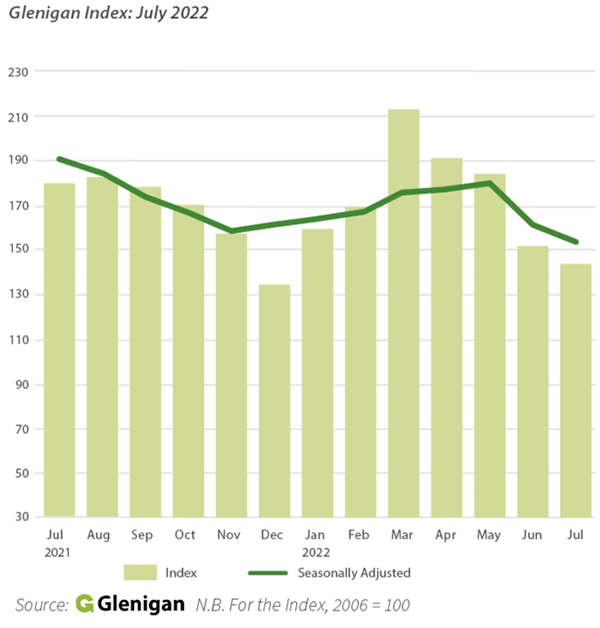 As Glenigan’s Economic Director, Allan Wilen, explains, “From July 2022, residential developers will need to ensure new buildings meet strict energy use standards required by the introduction of Part L, reducing carbon emissions by 30 per cent. As many get to grips with the specifics of this new regulation, and futureproof their assets to comply with other aspects of the Future Homes Standard, a quieter July was inevitable and could carry into August.”

However, there were some bright spots. General decline in non-residential work was offset by a slightly more positive outlook for health and education. The Index showed a modest uptick in starts over the last three months. This indicates emerging opportunities for future sector development.

Overall, residential project-starts fell in the three months to July following a solid growth in spring 2022, declining 7% against the preceding three months, and were also 12% lower than a year ago.

Social housing project-starts performance was particularly poor, declining 20% against the previous three months to stand 22% down on the same time in 2021.
Private housing work starting on-site faltered, slipping back 4% compared to the preceding three months, down 8% on a year ago.

Civil engineering starts fell back sharply, experiencing a 26% dip against the preceding three months and an overall decline of 39% against a year ago.

Drilling down into the subsector verticals, Infrastructure performance remained sluggish, with project-starts falling back 31% against the preceding three months, plummeting 42% against 2021.

Hotel & Leisure (-18%) and Retail (-6%) also experienced a value decline against the preceding three months, falling back 43% and 31% against last year, respectively.

Surprisingly, office project-starts stalled after delivering a strong performance during the spring. Starts dropped back 42% against the preceding three months, standing a woeful 44% lower than a year ago.

The pronounced declines in non-residential work were partly offset by improved performance in the health and education sectors.

Education starts were up 4% against the previous three months, despite coming in 27% lower than the same time last year.

Health starts jumped an impressive 44% against the previous three months, lifting the gloomy outlook slightly, and posted a 4% value increase on a year ago.

UK regional performance was weak, echoing the general decline highlighted throughout this Index.

The East Midlands was the highest performing region, with the value of project-starts rising by 10% against the preceding three months. Starts also edged slightly higher in Wales, as the region experienced a modest 1% increase against the previous three months to stand 2% up on the year before.

All other regions registered a project-starts decline during the three months to July, with London (-35%) and the North East (-32%) posting the steepest falls on the preceding three months. Both areas were also sharply down on last year.

Scotland, the South East, West Midlands and Yorkshire & the Humber endured double digit declines of 29%, 22%, 18% and 17% respectively against the preceding three months.

Northern Ireland saw a 29% drop in starts after strong performance registered in last month’s Index, but was the only region to experience a significant boost compared with a year ago, coming in 32% higher.

Wilen concludes, “The current drop in project-starts is no doubt another disappointing chapter in construction’s recent story of decline. Of course, construction materials inflation continues to be a stumbling block for the industry, but the decline in starts can also be attributed to an earlier rush of activity as developers brought forward projects due to start in July ahead of new Building Regulations coming into effect.

“Despite the immediate ramifications of these new regulations on industry growth, it’s great to see construction taking positive steps towards a net-zero future. The uptick in education and health starts over the last three months points to emerging opportunities in new areas of the market, a welcome sign for the industry. I’m hopeful too that going forward the delivery of promised increases in Government funding will help to bolster weakened sectors like private housing.”