Entering 2022, there’s considerable room for improvement. Whilst Q.4 of the year is typically weak, project starts performed particularly poorly. During December they were extremely low, dipping to a level not seen since 2010.

Global material and labour shortages, which have had a seismic effect on the industry are a root cause of this situation. Upsetting schedules of commenced projects, it has delayed many sites which have already committed shovel to ground. That’s not to mention contracts yet to start on site. 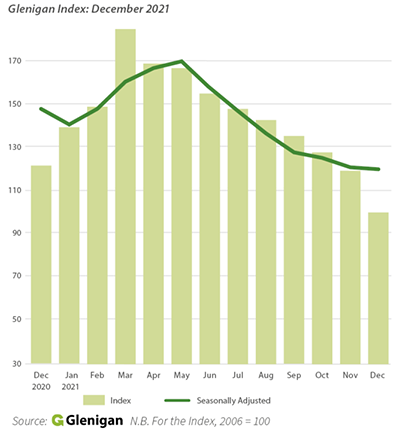 Taking a sanguine look at the residential sector, work starting on site fell by almost a quarter (-24%) during Q.4, against the previous year. Down a mere 1% against Q.3, it hints at a modest recovery since the start of the pandemic in 2019.

Unusually, social housing was the best performing residential sector. In this vertical, project starts increased 5% compared with the previous quarter, despite being lower than a year ago.

Conversely, the value of private housing starts fell 28% against the previous year and 4% compared to Q.3.

Non-residential construction had a mixed performance, having seen previously strong overall figures in Q.3 and much of Q.4. Office project starts performed particularly poorly, declining 41% against the previous three months to December, standing 30% lower than the same period in 2020.

Most areas of the UK experienced a decline, in line with Glenigan’s wider analysis. However, this should be regarded as a short-term dip, as predicted in Glenigan’s 2022-2023 Forecast, published in November 2021.

Whilst there has been a nationwide contraction, a few exceptions are indicating the long-anticipated resurgence of the sector is underway.

London and Wales both increased 16% and 14% against the preceding quarter. However, these positive lifts are tempered when taken against a 4% and 35% tumble compared to 2020 figures.

Although almost all other regions fell compared to the previous quarter, a handful were up on 2020 levels. Project starts in the North East increased 10%, and were up a massive 41% in Northern Ireland.

Decline persisted across other regions. In Scotland, the value of project starts fell 33% against the previous year and 27% against the last quarter. Arguably, Scotland was the poorest performing region across the whole of Q.4.

Commenting on the Index, Rhys Gadsby, Glenigan's Senior Economist said: “I urge construction professionals reading these figures to appreciate them in a wider, global context. It can be very easy to adopt a pessimist position if these results are understood in a local, short-term fashion. Previous Glenigan research has indicated a strong pipeline of contract awards and planning approvals going into 2022, with our Forecast highlighting that, subject to a stabilising of external events, the sector will see a resurgence in the next 24 months.”