Royal BAM tops leader board of civil engineers winning work over the past year according to Glenigan’s construction market research.

This workload has been buoyed by a share of work on the £1 billion Silvertown Tunnel project in east London and includes work on other major joint ventures, such as a £175 million Smart Motorway scheme on the M62 with Morgan Sindall.

Morgan Sindall is ranked fourth, one place ahead of Ferrovial, whose subsidiary Cintra is also on the Silvertown Tunnel.

All of Ferrovial’s UK workload is civil engineering based according to Glenigan’s analysis. At Royal BAM, 64% of the group’s overall £1.4 billion order book at Q2 2019 was civil engineering-related with the balance derived from building work. 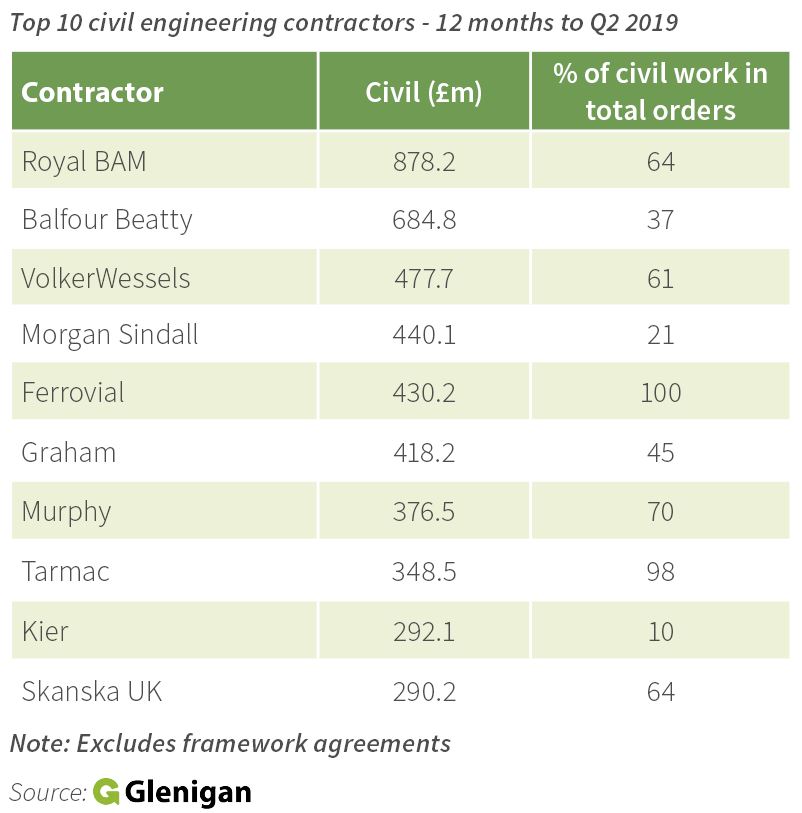 While civil engineering work is bolstering order books at many leading contractors, overall awards are falling and the sector’s importance to the industry has diminished – for now.

Glenigan’s construction market analysis shows that civil contracts won at Q2 2019 by the top 100 contractors totalled just under £7.6 billion. This latest total is down 33% compared to the same period 12 months earlier.

The drop is partly due to some major contracts dropping out of the latest 12 months rolling total but also reflects shrinking activity. The July 2019 update from the IHS Markit/CIP UK construction index showed that civil engineering activity had contracted at its fastest rate for a decade.

This was reflected in Glenigan’s index for Q2 2019, which showed that infrastructure starts had fallen by 28% compared to Q1 2019. Project starts were also down 7% on the same period in 2018.

Out of the top 100 contractors, 68 companies had taken on some civil engineering work over the last year. The other 32 contractors were all focused on building work.

At the same stage year earlier, only 58 out of the top 100 contractors had won at least some civil engineering work.

While activity has diminished, the prospects are not all gloomy. In its July 2019 update, IHS Markit/CIPS noted that demand for staff was resilient and that “forthcoming infrastructure projects were cited as a key source of optimism.”

These major projects are expected to revive civil engineering work this year according to Glenigan’s analysis, which forecasts a rise in project of more than 10%.

“Major infrastructure schemes, including Thames Tideway, HS2 and Hinckley Point, are forecast to drive civil engineering activity over the forecast period,” added Mr Wilén. “The value of smaller scale civil engineering projects starting on site is also expected to improve, having fallen back sharply over the last three years.”

Short-term gloom will be replaced by a brighter future.